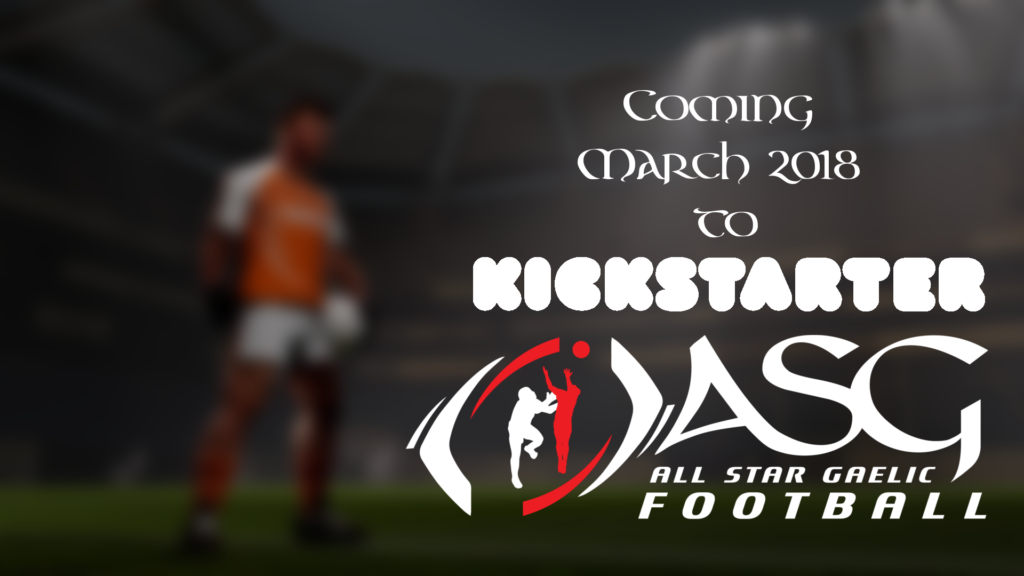 Mojopin Studios are proud to announce that we are bringing All Star Gaelic Football to Kickstarter in March! It has been a long time coming, but we are finally ready to give you all a bit more of a look at ASG Football. There will be some fantastic rewards available, with the game being the highlight of course, but there will be a reward for every level of backer who wants to do everything they can to help us bring the game to market.

We know that there is high anticipation for the game and we need that to translate into backers. So, do what you can to help spread the word, the more people that know about the game, and that back the game, the better the game can be. We will answer as many questions as we can within our Kickstarter campaign, so we won’t be answering any questions until then. We will release exact details of the Kickstarter launch soon, so stay tuned.

In related news, we will be in San Francisco to attend the Game Developers Conference in March as well. There, we will be meeting a number of potential publishing partners, which will hopefully take the game from strength to strength. We are all hands to the pump at the minute, and only look to be getting busier in the next couple of months. We look forward to showing you all a bit more soon, we hope you can repay the favour by sharing, sharing, sharing! Without you, this game cannot happen!

There has been a lot said in recent years with regards to the lack of competitive games for the so-called “weaker” counties in Gaelic Football. Just yesterday there was the reports of an “Angry Leitrim Fan” unhappy with the current structure. And there have been many more reports of the same from similar counties and commentators alike. The new Super 8 proposals do not address the issues surrounding the lower tier teams.

So we at Mojopin Studios decided to see what we could come up with to address the situation. See the below link for our proposals. (Yes, the proposals might be a bit formal, but we might present them to the GAA some day!)

Within these proposals, we aim to ensure 4 things:

The way we see it, the Championship has 4 ways of working:

Either way, I think we will provide all 4 options, for you to choose, for All Star Gaelic Football.

What do you think? How would you change the Championship for the better for all?

Happy New Year to you all! We trust you all had a good one. We at Mojopin Studios are planning on having a busy and productive 2017 and want to keep all you guys involved and engaged. Because of this we would like to get on board a social media guru!

What does that entail?

If this applies to you, we’d love to hear from you. Contact us at careers@mojopinstudios.com

At the minute, we are pushing this as a voluntary role with a view to making it more permanent in the future. So if you are excited about All Star Gaelic Football and would like to help out (and eventually get paid for it!) please get in contact!

Also, don’t forget we are always looking for more people to help out. Check out our Careers page for any open opportunities or go to How You Can Help for ideas on how you can help us get the game made! 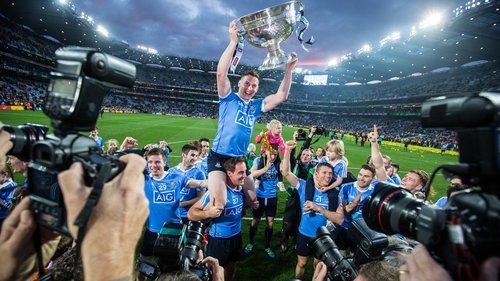 The RTE have come up with their ratings of the  counties for the coming year. The top 4 are probably to be expected but do you think Tipperary or Clare will be able to relate their success of last year?

We keep an eye on all ratings and previews to make sure All Star Gaelic Football lines up with expectations. We wouldn’t agree with all of the rankings be but it’s always interesting to see what others think. Have a look at the link below and let us know where your county should talk. 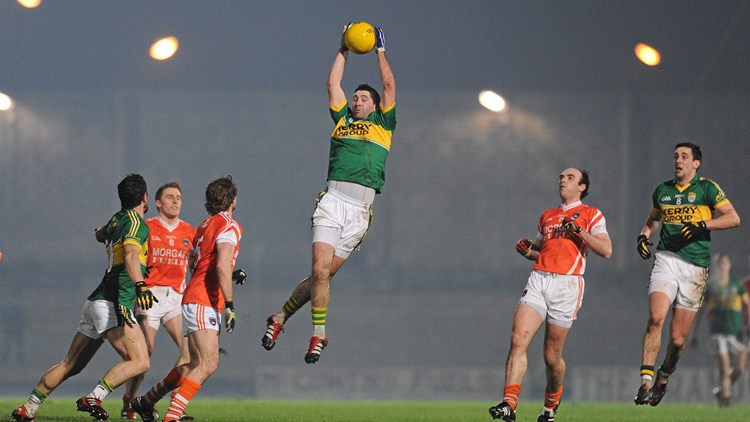 There has been a lot made of the new mark in the GAA. The last time it was tested it wasn’t exactly a success, but the powers that be have decided that now is the time to reintroduce it.

Is this something that we need to include in All Star Gaelic Football? Should it be an option or compulsory? What’s your thoughts on it?

Here’s a little piece from Jarlath Burns for his opinion on its benefits.

Jarlath Burns on the mark.

We are going to do a live stream in a couple of weeks as an “Ask Me Anything” event. We will be streaming the old Gaelic Games Football 2 and are looking for you to ask anything you like about All Star Gaelic Football.

We will be as open and honest as we can be and would like to hear what you would like to see in the game, what was good/bad about the previous games and just your general banter.

Reply on Facebook, email info@mojopinstudios.com or tweet us @mojopinstudios with your questions. Or join in on the night in Twitch chat. Date to be confirmed.

PS. We may give a tiny glimpse of ASG Football 😉

The 500th edition of the Gaelic Life has an article on us and All Star Gaelic Football. I would recommend picking up a copy if you can, but if that’s not possible you can read it at GaelicLife.com.

Just on the back of this we would like to emphasise how much your support and sharing of information about the game helps us to eventually get the game to you. Game development is a long and expensive process, when you want to do it right. We have learned that the hard way and as such are still on the look out for investment and sponsorship opportunities to help this get made.

To do this we need to reach out to the people with the right resources to help us along the way. The only way we can do that is showing the desire of the fans that want the game in their hands. That is you! We rely so much on you helping spread the word, sharing the website, liking/sharing Facebook posts, retweeting. It is you that can help make this happen.

Making games is not quick and easy, it is expensive, stressful and long. So we hope you have the patience to stick with us as we go through this journey. As we say in the article, we have some good contacts we are working on at the moment and we hope to have some good news regarding that in the near future. So stay tuned and SHARE everything you can about us and the game. If you have a rich uncle, let him know that we are looking to talk! 🙂

From jokes to serious opinion pieces, scores to podcasts. What do you enjoy seeing and what would you like to see?

Please fill in the below short survey and let us know your thoughts.

While we are working away on All Star Gaelic Football, we are still following our counties around the country. With National League Final weekend upon us, we look at the teams involved and give our brief prediction of how they will go.

In a repeat of last year’s All Ireland Final, we see Dublin face Kerry again. Dublin have had another relatively easy run through the league, with Roscommon arguably proving the biggest threat to their dominance. Kerry on the other hand started characteristically slowly and seemed to just get better and better as the campaign rolled on. Their thrashing of Roscommon in the semi final was a sight to behold and it sets them up fantastically for the final showdown.
Prediction: Kerry by 1/2 points

This all Ulster clash sees the runaway leaders, Tyrone, come up against the top scorers, Cavan. There will be no love lost, as is always the case in Ulster matches, and it is sure to be a tight and competitive game. Cavan’s forwards have been fantastic this year, but Tyrone’s organisation restricted them to 8 points in the fixture earlier in the year and I can see it being a similar affair this time round.
Prediction: Tyrone by 3 points

Kildare has dominated a 3rd division which was lacking much threat. Clare got into the final, and Division 2, on a fairly substantial score difference. Kildare have swept aside most challengers, only Sligo scraped a 1 point win, but their impressive goal scoring (10 in 7 games) was only halted by Clare, whose defence has shown to be fairly impressive. That being said, they will need their defence on top of their game, and David Tubridy to continue his fantastic form in front of goal to stand a chance.
Prediction: Kildare by 5 points

Division 4 was a 3 horse race, with Wexford disappointed with not making it through on the final day. Their 9 point win over Carlow was not enough as the 2 finalists played out a draw. If Antrim had have won, Wexford would be here on score difference. But just like that final day draw, I expect this to be another tight affair. Antrim are undefeated though and look like they have confidence in their manager, Frank Fitzsimmons, and he is getting the best out of his players. Louth will have a point to prove though.
Prediction: Antrim by 1/2 points

What do you think? Who are your tips for their respective divisions?

We at Mojopin Studios are always looking for people to help us out and what better way than to work with us?! We currently have 2 paid, temporary positions available but are also interested in people who want to come on board as co-founders.

Paid positions are in the fields of 3D modeller/texture artist and 3D Animator. See our Careers page for more information on these roles.

Co-founders are worth their weight in gold, we are doing so much that there just isn’t enough time in the day! By having talented people come on board as co-founders we can share the workload and be able to get down to what we really want to do, make All Star Gaelic Football! All you need to bring is passion, work ethic and some sort of talent that we may not have as yet.

If you are interested in the paid, or co-founder, roles please don’t hesitate to get in contact at careers@mojopinstudios.com.

We look forward to hearing from you!